– Tested it on a Chevrolet Aveo 2012 – worked in seconds, no decoding. But that was to be expected. They use the easiest transponders.

-I still using version 1.13 and cloned few Opel 46 without hassle.

-Can clone ALL ID46 chips, i.e clone ID46 for OPEL(Vauxhall)/Peugeot/Citroen. Never failed on id46 to someone.

– I have copied about fifty ID46 keys with the CN900 mini successfully. Two times it failed (1x Renault Clio, 1x Opel Movano), because I can’t sniff data from ignition.
T5, 4C was never a problem. Sometimes it was not able to decode 4D. It starts decoding till 99 and then it stops.
I use 4C/4D carbon and different CN chips from Ali. I don’t know if original or not. They works all for me fine.
Firmware is 1.13 I don’t see a reason to upgrade.
For this money it is a small good tool.

You have to update to version 1.32 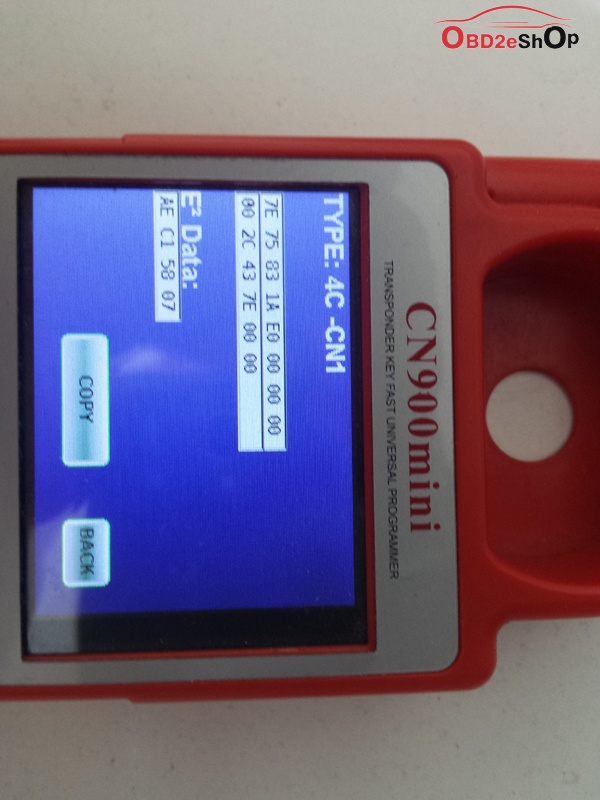 Decode button is now working. After pressing the decode button, you have to sniff data from ignition lock of the car.
After that, decoding starts, and lasts for AT LEAST 20 minutes. You can see at the picture, that decoding is already 20 minutes in progress.

After that I left it for another 40 minutes. When I came back, the decoding was finished.

As you can see, the Secret Key is visible, but it shows “xxxx xxxx”
I don’t know what the meaning of those “x”-es is.

After the decoding, the function “Unlock” is working.
Also “copy” button is shown for coping to CN6 chip. I had CN6 chip to test, I ordered cn6 transponder for id 48 for mini cn 900 from here (Tested and it’s working (for version above 1.20).

The problem here is that decoding time is very long. Almost 1 hour.

A: I can confirm it’s working fine

A: I can confirm it’s working fine

Q: So you guys say ID48 transponder cloning works, but what cars exactly does it support?

It just reads the chip and asks for a CN6 – it doesn’t say anything about decoding and so on… So i guess it clones only the ID if the ID48 chip which is only the non-crypto info. Like TS888 supports cloning of older Chevrolet/Daewoo and KIA cars? So it’s still nowhere near the functions of the Keyline tool and can’t even clone ID48 for old VAG cars around year 2000?

Another thing I noticed – it can’t read “Megamos I” transponders.

– The ID48 was added just few months ago.

I plan to test also a newer car with CS protection.

I think, device isn’t cloning ONLY the chip ID, because it has decoded my chip for 1 hour.

So it has to be password or security bytes.

Answer: I always order from here. It’s the guy who also sells CN900 mini devices. Tested and it’s working (for version above 1.20)

Q: I have a problem with my cn900 mini…touchscreen not working anymore when i select something it select another option

It’s someone that knows from where i can purchase touchscreen part?

A:Open and check the connector of touch screen. CLean the pins with alcohol before plug in.

Q: So has 4C cloning fixed yet?

A:yes, you have to use original cn1 chips, then where from do you get those original chips ? And how can you be sure they are original if you can’t test them on CN900mini before ordering?

A: fake cn1 chips are very old
most sellers on ali have new chips cn1 original
i ordered 2 last times and have original
tested on nd900 (to a friend) and on cn900,cn900mini